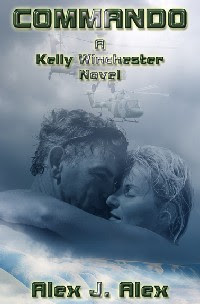 
The world is at war. Kelly Winchester is a U.S. Navy fighter / bomber pilot who is recruited by an elite force that has been formed to take the war behind enemy lines. Kelly has been successful where others have not. She falls in love with the commander of the unit, Jim Bradock, a Navy Captain and they marry, but she decides to keep her name.

The two embark on a Commando operation together, but are separated, and Kelly has to make her own way to try to accomplish the mission and make a return to friendly territory. She heads west, across China and Mongolia with the intention of finding U.S. forces in Afghanistan.

Kelly steals a plane and gets to within 100 miles of the border, then she has to walk the rest of the way. Once in Afghanistan, she is captured by the Taliban and is about to be beheaded on television when her husband leads units of the First Cavalry to rescue her.

Kelly sat there for at least a half an hour, minding her own business. She was about to give up and leave, when a nicely dressed man with a little mustache came in and crossed the floor in her direction, looking straight at her. He moved stealthily, like a cat. He had black hair slicked back flat on his head. He was smoking a cigarette.

He sidled up to her, motioning to the bartender to bring him a drink and refill Kelly’s. He smiled at her as if she should know who he was. He seemed to expect Kelly to speak first. Instead she smirked at him and turned toward the bar. She lifted her half-empty drink to her lips, downed it, slammed the glass down on the bar upside down and said in a purposely bored sounding voice, “Gon bay.”

The bartender handed him a glass and he did the same thing. “Gon bay,” he said, slamming his glass down on the bar.

Kelly turned her head to face him. She removed her dark glasses and batted her eyes at him.
“Wu Tang?”

He looked at her with amusement. “Madam Chang?”

“We’re supposed to know each other, aren’t we,” she said.

“I just know your name, and that you’re nice to look at.”

“I suppose you know who I am.”

“I admit, right now, you are a mystery. I like mysterious women.”

“So I’ve heard.” She dipped the middle finger of her left hand into the drink the thoughtful bartender had just placed in front of her. She swirled it around, raised her finger to her lips and sucked it into her mouth, sucking it in and out. She closed her eyes and sensuously made love to her finger the way she would a man’s penis, faking a gentle orgasm.

She slowly pulled her finger back out of his mouth. He sat there with his eyes still closed for a moment. Kelly dipped her finger into her drink again and raised it to his lips again. She didn’t let him suck it into his mouth though, she made him lick the alcohol off of it.

He opened his eyes. He cleared his throat and unobtrusively shook his head as if emerging from a trance.

“Would you care to dance?”
LIKED THE EXCERPT?? CLICK HERE TO BUY THE eBOOK
Posted by Alex J Alex at 9:14 AM