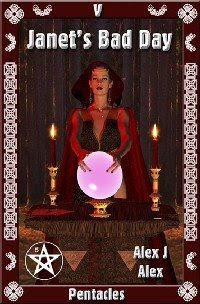 
Janet has a bad experience with her boss, a revolting person, while fantasizing about the characters in a book she has been reading. He asks her for sex the next day in the office and fires her when she refuses. She is car-jacked and snaps, getting the gun away from her attacker. She gets the attention of a policeman by speeding past him and tries to get his help, but she drops the car-jacker’s gun, reaches for it, and the policeman shoots her.

Excerpt:
Janet was a nice girl. She wasn't particularly smart, or pretty, or good at anything, but she was nice. She worked as a secretary at a small office in a large city. She lived alone with her cat, her bird, and a tank of tropical fish. She hadn't had a date in months and felt inadequate.

She had gone to see the Gypsy. The colorful woman always seemed to be laughing at something. But she hadn't laughed last night. She had gotten serious when she dealt out the Tarot cards and scanned them.

"But there are none of the bad cards showing," said Janet.

"Oh," said the Gypsy, "that's true. None of the really bad cards are here, tonight. But this one here… this one worries me. And it seems to be in a dominant position."

The Gypsy pointed to a card right in front of Janet. It was only the Five of Pentacles.

"What's so bad about that card?" asked Janet.

LIKED THE EXCERPT?? CLICK HERE TO BUY THE eBOOK
Posted by Alex J Alex at 8:33 AM