THE ADVENTURES OF MAX DAILY

THE ADVENTURES OF MAX DAILY by Alex J. Alex 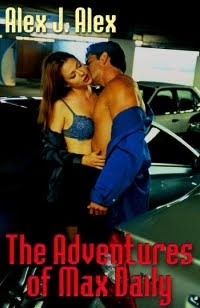 Max, a young hunk who has very little experience with women, gets out of the Marine Corps in 1968 and finds out his girlfriend has gotten married and moved away. He jumps in his old convertible and heads west to see the country. It seems that everywhere he goes he runs into fascinating--and sexy--women who fall all over him, from a ski bunny with two broken legs to a well-preserved bordello madam. From joining the mile High Club to starring in a triple-X movie, Max's sexual experiences are not only plentiful, but original and entertaining as well. Come along for the ride, and keep the top down.

Then, she appeared. She was carrying a large cloth bag.

“Yeah. I just love to ride around with the top down.”

“How old is this car?” she asked as she ran her hand along the fender.

“It’s a 1954 Lincoln. It weighs about three tons and it’s faster than it looks.”

“Sure.” He opened the trunk and she threw the bag in. It looked like a laundry bag that Max had had when he was in the Marines.

She gave him a smoky look and leaned against him, putting her arm around him and tiptoeing up to whisper, “I don’t wear any underwear.” She squeezed his buttocks, then slapped his butt. “Let’s go,” she said with a laugh, and she skipped around to the passenger side and got in.

Max hadn’t seen many women where he had been stationed for the past year, especially round eyes. This hitchhiker was almost more than he knew what to do with. The girls he remembered from before he had enlisted certainly hadn’t been as forward as this. A lot must have changed since he had left for Okinawa in 1965. He knew that there was a lot of anti-war sentiment, and that there were folks called flower children whose slogan was “Make Love, Not War”. He was beginning to think that he was linking up with one of them, and wasn’t too sure how to take it.

He was proud of his service in Viet Nam. The few Vietnamese he had met had been friendly even though they were awfully poor. They seemed to be pretty much indifferent to the war, but they treated U.S. servicemen with respect and friendship. He had heard that it was different down South in the delta, but North of Hue there was a conventional war going on between the North Vietnamese army and the U.S. Third Marine Division.

He got in the car, pumped the gas pedal once, turned the key, and pressed the starter button. The big V-8 roared to life with a healthy rumble. He put it in Drive, released the brake, and headed out onto the highway. The four-speed hydramatic shifted flawlessly as the big Lincoln shot down the acceleration ramp and merged with the westbound traffic. What a beautiful day for a ride.

“I like this car,” said Anita, her hair streaming in the wind. “I might even get a little tan.”

“You don’t look like you’ve been in the sun very much yet this summer.”

“You don’t get much sun in The Village.”

“Sort of. They call us Hippies now.”

“I was a Beatnik for a while, before I joined the Corps. I still carry around a copy of On The Road by Jack Kerouak. I even took it to Viet Nam with me. It’s in the glove compartment.”

“Listen, my old neighborhood in Newark is a lot more dangerous than Viet Nam was. I had a nice safe bunker to live in over there. At home, you never know who might shoot you or stab you in the alley and there seems to be more dope on the streets than I ever saw in Viet Nam.”

Neither of them spoke for a moment.

“Who cares? Let’s just live for the moment. I don’t care who you are or what you did. I just want to snuggle up to you.”

With that, she slid across the bench seat and leaned against him. Max put his arm around her.
She was warm and soft. She licked his neck.

“What was that for?”

He looked down at her and grinned. She snuggled closer. Then she took his right hand, slipped it under her arm and placed it on her breast. Max could tell that she hadn’t been lying about not wearing underwear--at least she apparently wasn’t wearing a bra. Her nipple was hard.

“How long has it been since you had a woman?”
LIKED THE EXCERPT?? CLICK HERE TO BUY THE eBOOK
Posted by Alex J Alex at 9:03 AM