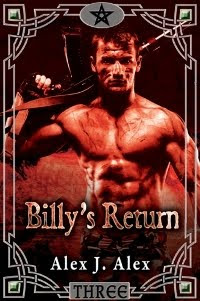 Three girls and only one Billy? Can he keep up?

It all started when Susan accidentally called up a minor demoness named Pantallas with a Tarot card. Then, at Diana’s birthday party, they played strip poker, all three of the girls and Billy, but that was before anyone knew about the pill so nobody went all the way.

Then Billy went to Viet Nam.

This story is about his return two years later. They are all on the pill now and intend to take advantage of it. Is Billy up to it? Can he really take on all three of the girls? Oh yeah! And all at the same time, with the help of Pantallas. But which one will he end up with?


BUY THE eBOOK *** READ THE EXCERPT


Pantallas hovered, unseen, above them in the shower. She waved her hands in a ritual gesture. Billy’s **** stiffened instantly, standing straight out, pointing at Susan.

“Oh my,” whispered Susan to herself.
She stood up and turned off the shower. They exited and dried off with the large towels thoughtfully provided by Joan. Susan led him out and into the largest bedroom, her wide, round hips rolling from side to side. There, in the middle of the largest king-size bed he had ever seen, were Joan and Diana, naked and flushed, waiting for Billy and Susan to join them. They were fingering themselves.
Susan dropped between them and joined them in playing with herself.
Joan sat up and smiled at Billy. “It’s my turn again. I’ve been practicing something, and I hope I can do it right. I might choke, so these two will have to help.”
She turned around and leaned her head off the edge of the bed, looking up at Billy. She looked at his **** and reached out for it.
“What I want you to do is **** my throat. I want you to slide that thing of yours all the way down into my throat so I can feel every bit of it while I swallow and keep swallowing. Now, you’ll have to pull almost all the way out on each stroke, so I can breathe, but I want you all the way in, too, each time.
Billy looked down at her. She tilted her head back and opened her mouth as wide as she could. Diana and Susan got up on each side of him and pushed him forward. Joan reached up and caressed his balls, which were hanging down and swinging beneath his ****. With her other hand, she guided it into her mouth and sucked it in.
“Ohhh!” said Billy. He pushed his hips forward so that his **** slid deep into her throat, and he could feel the muscles rippling around him as she swallowed, guiding his **** down the right pipe. His balls slapped against her forehead. He pulled out again so she could take a breath, but then, it felt so good, he involuntarily thrust forward again.
“Oh my god!” he yelled.
Pantallas made sure he stayed stiff and hard, and she made sure that Joan didn’t choke or gag and got enough air to breathe.
“Oh, Joan!” Billy thrust into her throat again, and then again. They developed a rhythm. Billy closed his eyes for a moment, then he looked down at her. He could see her throat expand as his dick entered and slid down into her esophagus.
Susan was rubbing her tits against his left side. She pulled his hand to her ***** and he played with her clitoris.
Diana got back up on the bed, stood up and placed her feet on either side of Joan’s head. She pulled Billy’s face to her *****, playing with it and spreading the lips.
Billy licked out with his tongue to her clitoris: it smelled so wonderful and tasted so good. He sucked on the little hood covering the most sensitive part of her *****.
“Ohhh!” she moaned.
“Mfff!”
Susan was caressing his balls as he slid his **** in and out, down Joan’s throat. He was still rubbing her clit.
With his other hand he reached around behind Diana and pulled her toward his face, playing with her marvelous ass as he sucked on her *****. He stuck his tongue in as far as he could, trying to insert it up into her ******.
Pantallas made sure he was successful.
“Oh god, Billy.”
Her hands were behind his head, crushing his face to her crotch.
And all the time, he continued to **** Joan’s throat. He had come so many times already that it seemed to last forever. Diana shuddered over and over again as he used his tongue to elicit the most satisfying orgasms she could have.
She finally had enough and almost lost her balance when she got dizzy on the last orgasm. She got down, and Susan took her place. He brought her to a massive orgasm which made her twitch and buck against his face. She, too, finally had had enough and got down.
And he continued to **** Joan’s throat. He looked down, fascinated by the way her throat expanded each time his **** entered it. He looked down the bed at her clean shaven *****. She was fingering herself. He leaned over and licked at her, brushing her hand away.
“Mmmm!” she moaned.
He lay down on top of her and, reaching around behind her to grab the cheeks of that perfect ass, he dropped his face between her legs and sucked her clit into his mouth. His nose pushed up into her ******. He continued to **** her throat as he did his best to pleasure her. Her juices were flowing all over his face. He finally rolled on his back, pulling her over on top of him. The sight of her ass bouncing up and down as he licked her ***** fascinated him and he finally felt himself beginning to come.

LIKED THE EXCERPT?? CLICK HERE TO BUY THE eBOOK