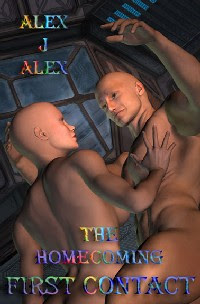 The muscular creatures have absolutely no hair – anywhere on their marvelous bodies, not even eyebrows. They live most of their lives in free fall and have learned that frequent sex with multiple partners is good for the body as well as the mind. Bill Thomas is immersed in this culture and discovers that women who are hundreds of thousands of years old can be sexy and hard to keep up with. Will 3, his alien companion, ever understand the notion of love, or a monogamous relationship…?


I opened the hatch.

The creatures hovering just outside the hatch, two males and two females, did appear to be human, just like us, except they were all bald. They had absolutely no hair. Even the females had no hair. And I mean they really had no hair at all. No pubic hair or body hair, not even eyebrows as far as I could tell. It was very curious. Here we were confronted by these exceptionally beautiful hairless creatures, each of whom could have been a model for a statue in the Greek pantheon of gods and goddesses.

On the one hand, we were all somewhat frightened and anxious about our situation. On the other hand, it was difficult to ignore feelings of sexual arousal. I mean these creatures looked good. They all appeared to have a deep bronze complexion. They might have had a fair skin to begin with, but they were deeply tanned. They were all very muscular and obviously in excellent condition. One thing about weightlessness, breasts and buttocks don't sag when there is no gravity so they all looked even better--and sexier--than they would have under normal circumstances on Earth.

They motioned us out. We were all fairly clumsy, but eventually we were all floating outside the hatch feeling self-conscious and trying not to stare at our captors. Nobody said anything, but there was no doubt that we could do nothing but comply with them.

Abruptly, one of the female creatures gave a flick of her cape and darted away. That's when I realized what the capes were for. She used it the way a bird would use a wing. It wasn't very large but apparently, in skilled hands, it could be very effective for moving about in free fall. I can't help saying that she looked incredibly sexy as she maneuvered her body this way and that.

The other creatures motioned us to join her out in mid-air.

LIKED THE EXCERPT?? CLICK HERE TO BUY THE eBOOK
Posted by Alex J Alex at 8:48 AM