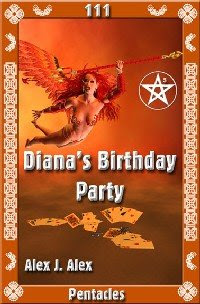 
Four childhood friends lose their innocence when one of them calls up a demon who strips away their inhibitions. Joan and Susan give Diana her birthday wish, a game of strip poker including their friend Billy. The game is enhanced by Pantallas, a quirky demoness conjured up by Susan, who is most interested in their good time.

“Joan, there’s something peculiar about this card. I get a tingling sensation every time I touch it.”

Billy handed it to her.

“Here,” said Billy, “Let me show you something.”

He took the card and slipped it into the front of Joan’s shorts.

“Oh, Billy,” she said. He had rarely done anything like that before.

“Just leave it there for a while,” he said.

They walked a little further.

“I’ve got a strange feeling in my pants,” said Joan.

“It makes me want to kiss you and make out with you,” she giggled.

“I’ll bet Susan is behind this, or Diana.”

“You know we’re all witches, don’t you? Or at least we’re trying to be.”

“Oh, yeah, you’ve told me all that stuff before.”


LIKED THE EXCERPT?? CLICK HERE TO BUY THE eBOOK
Posted by Alex J Alex at 8:26 AM