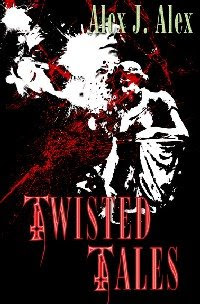 
From a sniper in the jungle, a snake in the desert, and three shady characters involved in a very unusual execution, to witches in New England, an old fisherman, and both sides of the tragic war of attrition on the Emerald Isle, Alex J Alex gives us love stories, tragedies, war stories, and humorous touches in everything from very short to long. Enjoy reading them, but keep the nightlight on!
BUY THE eBOOK   ***   READ THE EXCERPT


Pierre was about to bust, but he waited for her to notice the battered violin case on the table.

“What’s this?” she finally asked.

Her eyes grew wide as she opened the case and lifted the instrument, feeling its perfect balance and examining the exquisite wood grain.

They heard a commotion out in the hallway.

She raised the violin and reached for the bow.

Someone pounded on their door.

“Police!” someone shouted. “Open up!”

Pierre and Alice looked at each other in stunned silence.

“Break it down!” a voice shouted .

The door burst open and three uniformed policemen in flak jackets and riot gear rushed in. They all carried shotguns. The first thing they saw was a woman in the dim light holding what looked like a rifle to her shoulder. Shots rang out. Alice slumped in her chair, blood spurting from several wounds.

“No! No! No!” shouted Pierre as he jumped up and rushed at the intruders to stop them. All the officers saw was someone rushing at them. More shots rang out as they shot him, too.

“Damn!” a voice said as Detective Arugula pushed through the door. “Why’d you have to shoot them?”

“I thought she had a gun,” the policeman replied, “and then this guy rushed me. I had to defend myself.”

Arugula reached down and grabbed Pierre by the collar. “Where’s the dope, you scumbag?” he shouted, his face an inch from Pierre’s. “We know all about your operation. We’ve got eyewitnesses, willing to testify against you and we’ve had this building under surveillance for weeks.”

Pierre’s head rolled back. Tears rolled from his eyes. Blood gurgled from his throat. He realized that he had never actually met Detective Arugula. “I’m Pierre Valois. I’m the one who called you. Why have you done this?”

It was the last thing he ever said.

Detective Arugula looked up at the door. It clearly said this was apartment 3-B.

Julio and Abdulla were racing down the hall to the stairs, leaving the door to apartment 3-E wide open.

“My God!” the detective declared. “What have we done.”
LIKED THE EXCERPT?? CLICK HERE TO BUY THE eBOOK
Posted by Alex J Alex at 9:11 AM